One of the most common ant pest species in southern Arizona, Iridomyrmex pruinosus, or Forelius pruinosus, as the species is known today, is often mistaken for the highly pestiferous Argentine ant species. Argentine ants are common ant pests in most southern states, but they are relatively less abundant in Arizona. F. pruinosus, on the other hand, is consistently the first or second most commonly encountered ant species by pest control professionals in residential areas of Phoenix. This pest species is also among the top 5 most commonly encountered ant pest species in residential areas of Tucson. While this ant pest does not inflict venomous stings to humans, F. pruinosus workers invade homes in large numbers, and eradicating infestations is exceedingly difficult, even for professionals.

DYI pest control techniques will usually not suffice to eliminate F. pruinosus infestations, and most infestation victims do not bother with such techniques after seeing the overwhelming number of ants an infestation entails. Although F. pruinosus colonies are not as large as Argentine ant colonies, the former occasionally nests within houses, while the latter sees workers invade homes from outside nests. In most F. pruinosus infestation cases, the workers invade homes from nests located near the foundation and at the surface of soil beneath concrete slabs. Nests are also frequently found in exposed soil and obscured beneath objects like stones, leaf litter, patios, wood piles, logs, and around stumps. This species is abundant throughout the southeast and in much of the southwest, but specimens collected from these two areas look markedly different from one another. Southeastern species are usually dark, while southwestern species see workers come in a variety of shades and colors, but most are light in color. Workers are relatively small at only around 1.8 to 2 mm in length regardless of their geographic location, and they form uniform foraging trails that lead into homes from outside nests. When crushed, F. pruinosus secrete a fluid that smells strongly of rotten coconut, not unlike the odor produced by the aptly named odorous house ant species.

Have you ever experienced an infestation that consisted of an unusually large number of ant pests?

Several insect species in Arizona are considered pests within human dwellings, but not all insect pest species in the state are able to survive and reproduce within homes for indefinite periods of time. This is the case when it comes to seasonal insect house pests, such as boxelder bugs, elm leaf beetles, and cluster flies. These insect pests invade homes in large numbers during the fall in order to overwinter, but they are unable to reproduce indoors, and unless they eventually re-establish an outdoor presence, they will perish within homes. However, the most common and pestiferous insect pests commonly found in Arizona homes, like cockroaches, termites, house flies, bed bugs, carpet beetles, and many ant species, establish reproductive populations indoors. These insect pests are able to establish lasting indoor infestations that can be difficult to eradicate.

Have you ever experienced pest issues with southern fire ants?

The velvety tree ant is one of many nuisance ant pest species commonly found around and within Arizona homes. These ants establish nests within dead wood sources that have become decayed or waterlogged. This species’ most common nesting sites are located within tree stumps, dead trees, isolated logs, beneath the bark of living trees, and within soil located beneath dead wood. These ants have also been known to nest within structural and cosmetic wood sources, especially in damaged structural wood that makes contact with the ground soil. While velvety tree ants do not feed on structural wood like termites do, they can cause further damage to structural and cosmetic wood sources that have already become compromised by rainwater, plumbing leaks or lawn irrigation. Velvety tree ants may also infest yards where they build an extensive network of foraging trails below and above the ground. Although these ants do not sting, they may bite when disturbed.

In addition to nesting within damaged structural and cosmetic wood sources, velvety tree ants may also establish centralized nesting sites within decayed natural wood sources located on residential lawns. These ants sometimes become abundant near or alongside structural foundations where the pests can easily invade indoor areas in large numbers. Reproductive swarmers emerge from colony nesting sites every summer, and these swarms have been known to emerge from infested structural wood within homes. The nests that these ant pests excavate within wood resembles a honeycomb, and workers venture back and forth between the nest and the outside environment where they prey upon honeydew-rich aphids and other insects. Velvety tree ants feed on a variety of human foods as well, which may attract large numbers of worker ants into indoor living areas, particularly kitchens and pantries.

Black to brown colored velvety tree ant workers range from ⅛ to ¼ of an inch in length, and they are often confused with odorous house ants due to their similar indoor foraging habits, appearance and for the unpleasant odor that workers emit when they become threatened or crushed. Velvety tree ants are also frequently confused with carpenter ants due to their habit of nesting within decayed structural and cosmetic wood within homes.

Have you ever found ants congregating in your cupboard or pantry?

The Native Southern Fire Ant Is An Aggressive Species That Inflicts Painful Stings And Infests Homes, And At Least One Envenomation Incident Resulted In Death

Like other fire ant species, the southern fire ant often inflicts damage to lawns which can sometimes be costly for homeowners. When fire ants infest a lawn their unsightly dirt mounds become a conspicuous part of the landscape, and southern fire ant nests can also become established indoors. Much like red imported fire ants, southern fire ants will emerge out of their nests in large numbers if they become distrubed. These ants will not hesitate to climb onto a person’s body before inflicting numerous stings, which can be fatal to those with an allergy to arthropod venoms. These ants can also establish indoor infestations that can pose both a medical risk to a home’s inhabitants as well as a nuisance. The southern fire ant prefers to establish colonies within lawns where grass is stressed and dry, making them a prominent species in southern Arizona. This species can also establish nests within wall-voids, below carpeting, and in crawl spaces, and colonies can grow to contain 10,000 individual ants. While anaphylaxis does not often occur in response to southern fire ant stings, this species was believed to have caused the death of a three month old baby after the ant pests invaded a day care center.

Have you ever experienced a fire ant infestation either indoors or outdoors?

The transport of insects to regions where they are not native is a serious problem in today’s world. Not surprisingly, this problem has existed ever since mankind took to the seas. When Columbus, and early European settlers in America first traveled across the Atlantic, they probably did not anticipate upsetting the balance of the world’s ecosystems, but this is exactly what has occurred as a result of maritime travel. Although customs officials and other authorities do their best to prevent the accidental transport of insects into non-native regions today, the fact is that invasive insects are increasing. Fire ants happen to be one of the earliest known insects to be transported to regions all over the globe via maritime travel. There may have been numerous other insect species that had been transported to non-native regions before fire ants, but fire ants were the first insect species to establish a global habitat as a result of careless sea travel. Many insects likely die as a result of being ill suited to new environments, but the durable fire ant has endured in just about every non-native habitat where they have been introduced.

During the sixteenth century, Spanish ships accidentally transported fire ants from the Americas to other regions across the sea. Fire ants had always been native to the Americas, but thanks to early colonial travel, fire ants have established habitats in every location that is either tropical or subtropical. The early transport of fire ants allowed people from all over the world to experience their extremely painful bites for themselves. Researchers recently published a study in the Journal of Molecular Entomology that describes how fire ants established their invasive habitat hundreds of years ago.

The manner in which fire ants spread in the sixteenth century will amaze you, as early maritime travelers seemed to be trying to spread as many insects across the globe as they could. Back then, when a ship would dock at a port, the crew would fill the ship’s ballast with soil only to later transfer and dump the soil at another port in a foreign country. Once the soil was dumped, its weight would be replaced with cargo. Of course, early sea travelers were simply ignorant of the consequences of transporting soil to different parts of the world. However, if they had known that they were moving enormous amounts of insects within the soil, they may not have stopped, as the negative environmental consequences of this insect transport were not known to most people at the time.

Do you think that enough precautions are taken today to prevent the global spread of insects by means of maritime travel? 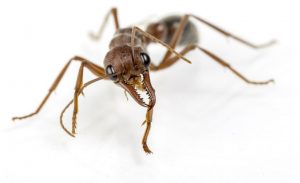 Spotting a line for food at a summer barbeque can be exciting, but not when it’s accompanied with a line of ants. Magic Pest Control says prevention of these picnic-crashing pests is key because they can be difficult to control once they infiltrate a property in large numbers.

Summer cookouts, and the crumbs they leave behind, are the perfect targets for ants in need of food and water. There are, however, quick tips and tricks that homeowners can use to sidestep ant infestations. These simple efforts can go a long way, as ants can contaminate food and colony sizes can be quite large depending on the species.