My Son Thought It Was A Toy Scorpion…

Yesterday a homeowner called us here at our Gilbert offices and inquired about pest control services and prices. She had seen a few scorpions in and around her home…nothing that she would call an infestation, but enough to warrant a phone call to Magic Pest Control.

I mean, it’s summertime in Arizona, we have scorpions in abundance right now…it’s the desert. 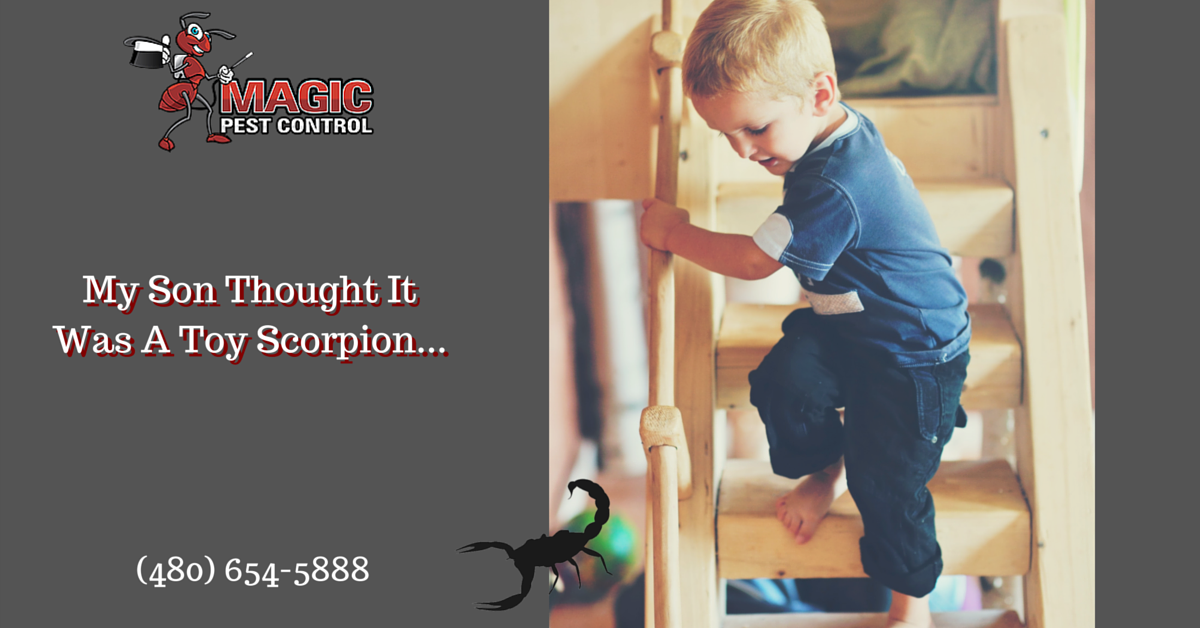 The homeowner scheduled monthly services, and proceeded to tell us about a very scary incident that prompted the phone call – her son picked up a scorpion.

It was a normal summer day…errands, swim lessons and home for lunch.

She got the diaper bag out of the car and carried it into the house, placed it on the counter and started making sandwiches for the kiddos.

After lunch, the 4-year-old got down from the table, walked over the the diaper bag and went to grab a toy…

It was a brownish-yellow insect, one of their plastic insect toys, stuck to the side of the diaper bag, or so he thought.

The homeowner saw the boy reach for the ‘toy,’ but didn’t think anything of it until that toy moved!

Well, the 4-year-old went to pick up the ‘toy,’ which was actually a Bark Scorpion that had flattened itself against the side of the diaper bag, and screamed in terror as the ‘toy’ came to life.

Thankfully, the homeowner noticed the scorpion fast enough and quickly swatted her son’s hand away, just moments before he was about to pick up the live scorpion…no doubt when he would receive an extremely harmful sting from that scorpion and make an emergency visit to the hospital.

This situation could have happened in any home in Gilbert and throughout the valley.

In fact, this woman was lucky. She was able to stop the young boy from touching the scorpion. Our pest control techs hear stories again and again of young children, not realizing how harmful it can be, picking up scorpions or going to touch them out of curiosity.

If you’re worried about your family and scorpions, here’s a few things you need to know: