Does Diatomaceous Earth Work For Scorpions?

Does Diatomaceous Earth Work For Scorpions?

It’s a question we get nearly every single day…

“Does diatomaceous earth really work for scorpions” and “Where can I get some?”

Let’s break this down.

If you have scorpions in or around your home, DIY pest control just isn’t going to do the trick. IN fact, DIY pest control might actually trick YOU into thinking what you’re doing is working because maybe, just maybe, you don’t see a scorpion for a few weeks…

But, I guarantee those scorpions are out there, they’ve just been avoiding the ‘line in the sand,’ so to speak. 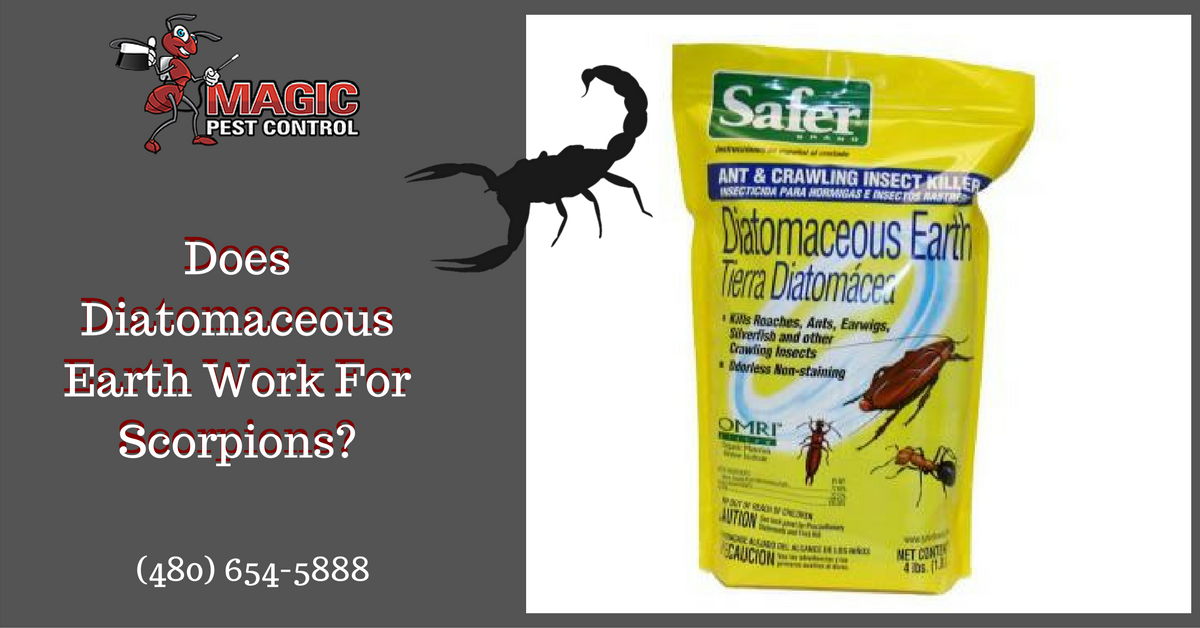 So, today let’s answer the bit question about diatomaceous earth:

Technically speaking, yes, diatomaceous earth is made up of a material that will dehydrate and literally destroy any pest with an exoskeleton. So, ants, spiders and scorpions, as well as cockroaches, will be affected by diatomaceous earth…if they come into contact with it.

Let’s say a scorpion happens to cross the line of diatomaceous earth. That slow death will take time…long enough for that scorpion to still get into your home.

It has been clinically proven in a lab that diatomaceous earth will kill a scorpion, but it takes one to two weeks!

Well, now that you know diatomaceous earth can work to kill scorpions…eventually, the next question you need to be asking is “Is it safe?”

Where To Lay Diatomaceous Earth

If you’re still thinking about DIY pest control with diatomaceous earth, consider laying a boundary around the foundation of your home, including the garage. You’ll also want to place diatomaceous earth around the concrete fencing we have here in Arizona, as well as in between the bricks.

If you have any plumbing pipes coming out of the walls of your home, dust diatomaceous earth around those pipes and holes.

Honestly, if you have had more than one or two scorpions in your home in the past few weeks, you need to call in an expert.

[schema type=”organization” orgtype=”Organization” url=”http://www.MagicPest.com” name=”Magic Pest Control” description=”Termites can do a great deal of damage to your business. Be sure to have the best termite control company on the job!” street=”700 N. Golden Key Street” city=”Gilbert” state=”Arizona” postalcode=”85233″ country=”US” email=”magicpestcontrol@cox.net” phone=”480-654-58]

PrevPreviousEverything You Need to Know About Termites
NextDo You Have Termites?Next