Arizona Termites – What Type Is Living In Your Home?

Arizona Termites – What Type Is Living In Your Home?

Termites can make quick work of destroying a structure to the point that repairs may not be feasible. These tiny insects live in colonies that can be massive. Documented cases have revealed that some queens of termite colonies have lived for more than 50 years. Experts say that it isn’t a stretch to say that they could live to be 100 years old. In Arizona, termites are generally found to be one of five species. 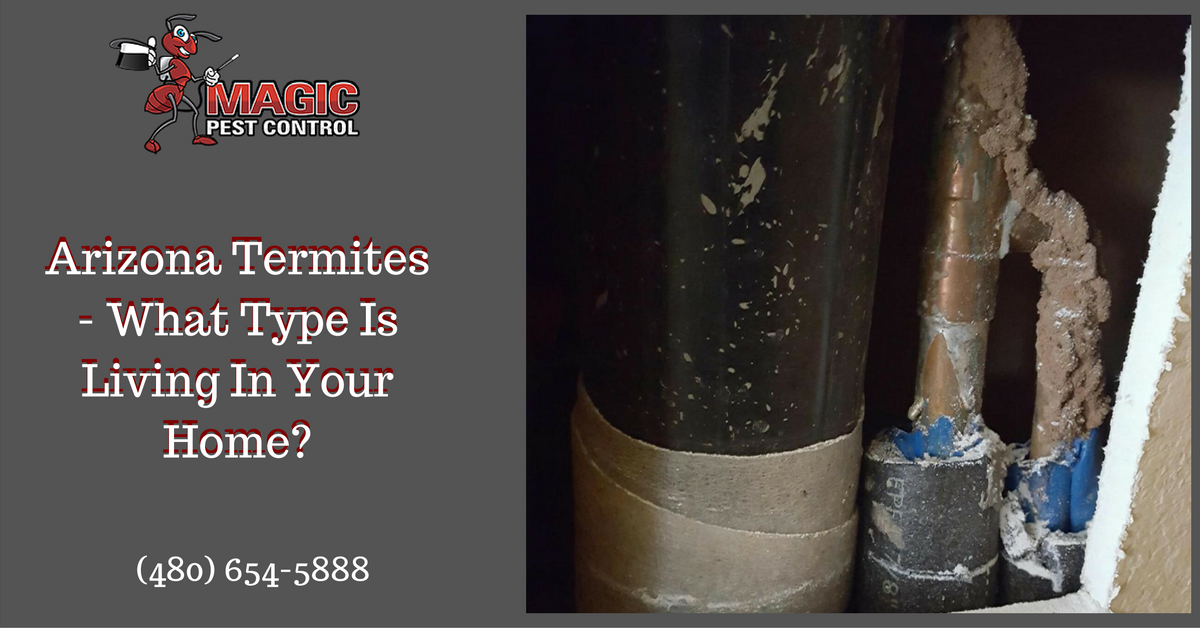 One of the most common subterranean termites in Arizona, these termites are pretty much restricted to the area as well as California, mainly in the desert areas. They do show up from time to time in Colorado as well as Houston, however, they are mainly concentrated in the Gila desert of Arizona and California. While they can live in desert plants such as dead cactus, they can be extremely destructive to structural timbers in homes, out sheds and other buildings as well as utility poles and other structures constructed of timber.

Considered the most common and destructive termite in Arizona, the arid-land subterranean termite can be found in a good two-thirds of the country, from the Pacific Coast to Indiana, to Mississippi and across the Gulf Coast, then upwards to Montana. Their colonies have been found in a variety of land types from sand dunes to altitudes in excess of 7,000 feet within the states of the Rocky Mountains. While they can be found in moist environments such as river lowlands and along streams, they are primarily a desert species.

Swarmers measure around 1/3 inches long with wings or 1/5 inches without. Their bodies are black or dark brown with whitish wings. Soldiers are about ¼ inches long and their jaws are very similar to those of the desert termite in that they are long and straight. The only difference is that the arid-land termite’s mandibles are a little thicker.

These termites are typically found along the coastal areas as well as in the southwest, as far north as Sacramento. They are heaviest in the coastal areas. In Arizona, the Western Dry wood termite is responsible for the majority of the drywood termite damage. They live in timber, including furniture, picture frames and wood that have a moisture content that is less than 12 percent. Humans are responsible for a good deal of their distribution through furniture and other wood household objects.

Swarmers are approximately 1/3 inches long, wings included. The abdomen is dark brown while the head and pronotum is a brownish orange. Soldiers heads are anywhere from orange to a reddish brown with whitish eye spots. Their mandibles have an unequal number of teeth and antenna that are large in the third segment.

These termites are the largest in the United States. They are also the most significant, found as much as 6,000 feet above sea level. However, they seem to prefer the humid, cooler coastal areas as that is they are most commonly found.

Swarmers can be as much as 1 inch in length. They are a light to medium brown. Their wings are dark brown. Soldiers are typically the largest termites in the United States. They have large heads with long, black mandibles. Their bodies are black to a dark reddish brown with the abdomen and thorax typically a light brown.

This species of termites is mainly confined to the arid and semi-arid southwestern states including Arizona, New Mexico, Texas and California. They live in wood that often extends into the soil. They have been known to overtake shrubs and trees, killing them.

Swarmers are dark brown in color.

Termites in Arizona are destructive pests and they can be a challenge to control.

It is best to leave termite eradication and control to a pest professional.